With well over 30 years’ experience in racing administration and success as an owner and breeder, Jack Pollock became one of the best-known personalities in New Zealand racing.

He represented both the Owners’ and Trainers’ Federation and the Thoroughbred Breeders’ Association on the New Zealand Racing Authority – this was declared a triumph for both organisations as his knowledge, experience and ability was well regarded by both organisations. 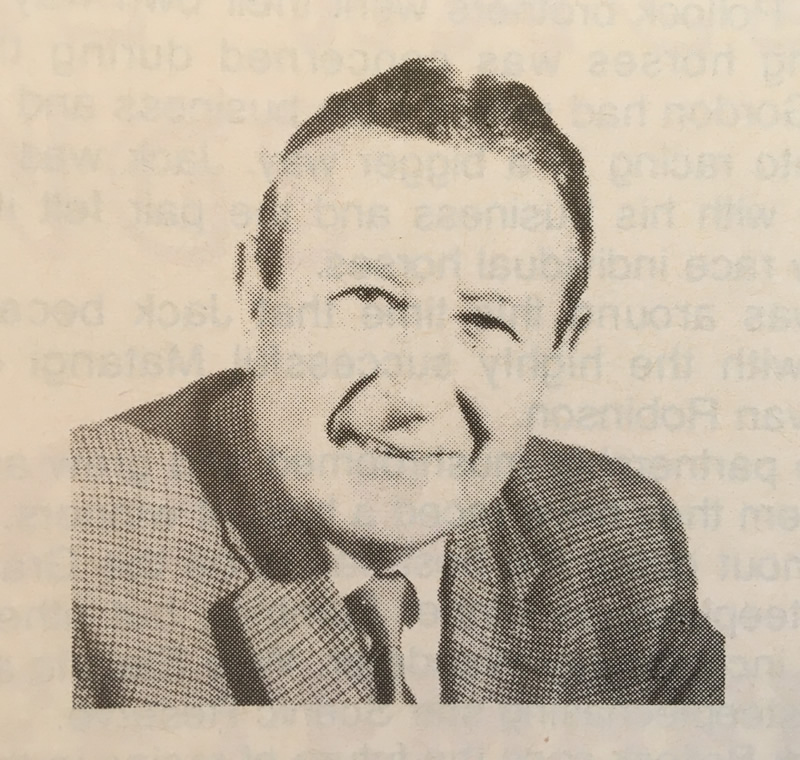 Jack’s interest in racing began when he was a schoolboy. Born in Auckland he spent his early life in the Thames Valley town of Te Aroha and it was there that he attended his first race meeting. His father, who worked for the Lands and Survey Department, was a keen race follower and he took Jack and younger brother Gordon to the Te Aroha race meeting.

Brother Gordon became known as one of the more prominent New Zealand owners. He regularly had a big team of horses in work and experienced great success through the late 1970s with Heidsieck, Timon, Tonic Time and Captain General.

Jack and Gordon set up a racing partnership and the pair raced their first horse in the early 1940s. They purchased a horse called Verus and, although only a moderate galloper, he did win a race for them. Probably the best horse the partnership raced around that time was Irate, who won a Stratford Cup.

In 1954 Jack Pollock was elected to the Committee of the Waikato Racing Club – and so began a long and successful career in racing administration that was to take him to the Racing Personality of the Year Award in the mid-1960s, and earn him an MBE for Services to Racing.

Jack stood down from the Waikato Committee in 1965 for two reasons. First in his mind was that he felt he had achieved all he could with the Waikato Club and it was time to make way for the younger brigade. His second, and no doubt equally as important, reason was that he was in the process of establishing the P&M Plaza in Hamilton.

Jack had started up in business in Hamilton and his business acumen was apparent through his success in the retail sector. In 1933 he and Harold Milne established the fabric shop Pollock and Milne in the Railway Buildings, Victoria Street, Hamilton. This went on to become the P&M Plaza which, at that time, was the biggest shopping complex in Hamilton. The building and establishing of the Plaza took up much of his time and in fact took nearly three years of planning before completion in 1967.

The P&M Plaza also became involved in racing with the P&M Plaza Purse being a notable race at Te Rapa. The Alexandra Racing Club, which raced at Pirongia, near Te Awamutu, every Boxing Day for [at that point in time] the past 107 years had received considerable sponsorship from the Plaza while the Cambridge Jockey Club held a loan from the organisation, made to assist in the building of the new training complex.

[NB: The Boxing Day races at Pirongia were a mainstay annual event for over 150 years. In late 2019, the decision was made to “put the event to sleep”, after three years of making a financial loss. Racing had switched from thoroughbred to harness several years earlier after a horse fell while competing. The cost for the club to bring the event up to the required standard for thoroughbred racing was too large, and the club couldn’t compete with other harness events and Boxing Day sales.]

Towards the end of the 1960s Jack Pollock was approached by a deputation of the Owners’ and Trainers’ Federation and asked to stand as President. After being convinced that he would have total support, he agreed to seek the position. Jack held the Federation Chairmanship until 1975.

One of the highlights he recalls were the many months of work put into the submissions to be presented to the 1969 McCarthy Royal Commission into Horse Racing, Trotting and Greyhound Racing. That Commission recommended the establishment of the Racing Authority, on which Jack Pollock ably served both the Owners’ and Trainers’ Federation and the Thoroughbred Breeders’ Association.

A magnificent porcelain figurine named “Fumbler” was the gift of the NZ Racing Owners’ and Trainers’ Federation to Jack Pollock MBE.

The occasion was Mr Pollock’s retirement from the NZ Racing Authority and the presentation was made by Federation President Sid Munro at the Annual General Meeting in Palmerston North.

The figurine was one of limited and numbered mouldings prepared by the same NZ firm that made the porcelain figurine presented to Her Majesty at a State Luncheon in Wellington. 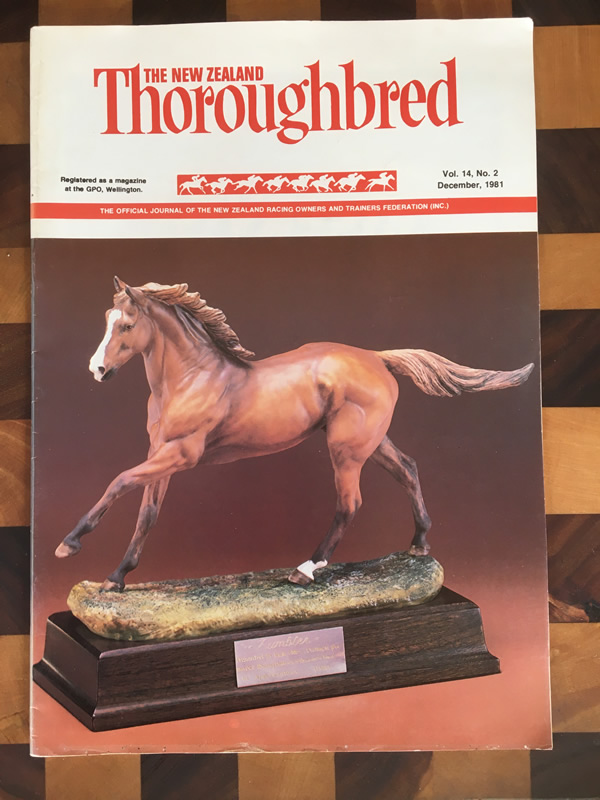 It was appropriate that the Pollock presentation should have been made on the Awapuni racecourse, only a few yards from the winning post that Fumbler passed victoriously in the Hung Cup Steeplechase, before his Grand National success.

Owned in partnership with the late Ivan Robinson, Fumbler was a favourite of Mr Pollock’s.

President Sid Munro spoke feelingly of Jack’s dedication to the Federation and, in particular, the work accomplished by him as joint representative of the Federation and the NZ Thoroughbred Breeders’ Association on the Racing Authority.

The reply by Mr Pollock was delayed while he overcame his visible emotion and he then spoke for some time to a hushed audience.

Jack traversed the history of the Federation and mentioned some of a number of people who had helped him during the inception of the Royal Commission and the formation and work of the Authority.

Sir Denis Blundell, the Federation’s Patron, in a personal letter to the President, asked to be associated with the tributes, mentioning the many years he had known Jack, from the times in 1950 when, then as E D Blundell, QC, he had represented Conference before Mr Pollock, Chairman of the Waikato District Committee in the early doping cases.

Jack Pollack had many racing interests and he raced many horses. As a member of the Thoroughbred Breeders’ Association he was actively involved in thoroughbred breeding and bred many fine winners.

He was seen as “a creative thinker, a ‘go-getting’ businessman, determined and capable in argument, yet most skilful in public relations.” His financial skills guided Waikato Racing Club through difficult times, his leadership of the Federation has gone down in history and his influence within the racing industry was game-changing.