Owned by: Mrs A G A Cross, Mrs S Dower, M W Gething, T R & Mrs V M Pascoe, Mrs N Rochester, Mrs J A Rodgers, Mrs J M Stubbs & Mrs P E M Woollaston
Trained by: Scott Wenn
Breeder: Mr T R Pascoe, Mrs V M Pascoe, Mrs A G A Cross, Mr M W Gething, Mrs P E M Woollaston
Sire: Nadeem (Aus) 2003
Dam: Honorjeu (NZ) 2004
Foaling: 21 Sept 2011
Neddy is a 7YO bay gelding who, along with all those involved with him, experienced the highs and lows of racing, and just about everything in between. He retired from racing at the end of 2018, at the top of his game – and with a helluva story under his belt. Here is his tale … 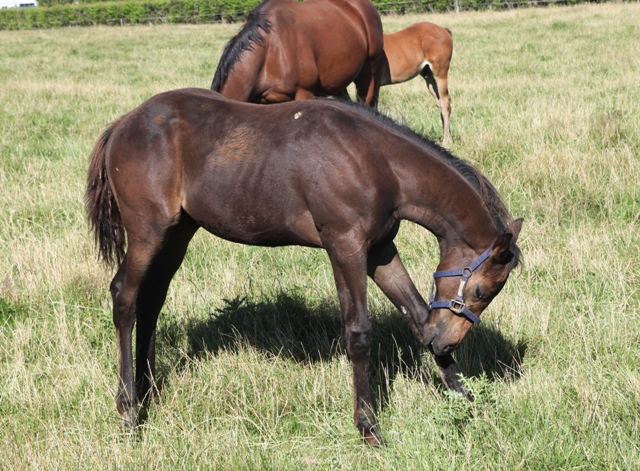 It became apparent early on that Neddy was a horse who needed time to show his true ability. He arrived back from Australia with his mum as a two-month-old brown foal – and a conviction that if anyone touched his ears or tail the world would end. It took, in fact, more than two years before he was convinced that it wouldn’t.

Along with his own predilection for turning a piece of paper on a driveway into a tiger, and a trickle of water running over concrete into something that needed six feet of clearance, there was the thumb in the sky. Neddy’s worried little brain had difficulty coping with unforeseen things thrown his way – like the time when, whilst being prepared for the yearling sales, he jumped over a gate in response to an “eejit” firing a shotgun right next to his paddock. He hadn’t factored in the electric wire running over it and ended up tangled in both the gate and the live wire.
His back legs were not a pretty sight and, whilst it was initially thought to be superficial, the slight lameness didn’t resolve itself and he underwent further examination. Thankfully all was clear and Neddy was loaded onto the Club Med Lodge truck to head home. (Club Med Lodges offers quality agistment in the Waikato).
It was the bang from inside the truck that at first alerted Terry Pascoe that something may be wrong. But it was the shadow running alongside the truck that made him pull over; the shadow was of a truck with a horse head sticking out the top and a leg sticking out the air vent. Terry doesn’t panic but in the right circumstances he moves very quickly indeed. Neddy, on the other hand, was quite calm and, when extricated from the truck, stood quietly beside the busy main road waiting for the vet. He then walked back on the truck and didn’t move all the way home.

With lacerations spreading from his back legs to his head, neck and one front leg, the yearling sales were clearly out. Neddy needed daily medication, dressing changes and wound cleaning but throughout this very uncomfortable time he did not once become nasty. However, he equated people with discomfort and there wasn’t a lot of trust there.
It was back to Club Med, which lived up to its reputation, and Neddy spent a lazy summer eating good grass. As summer became winter, school was on the horizon.
School was on the horizon. 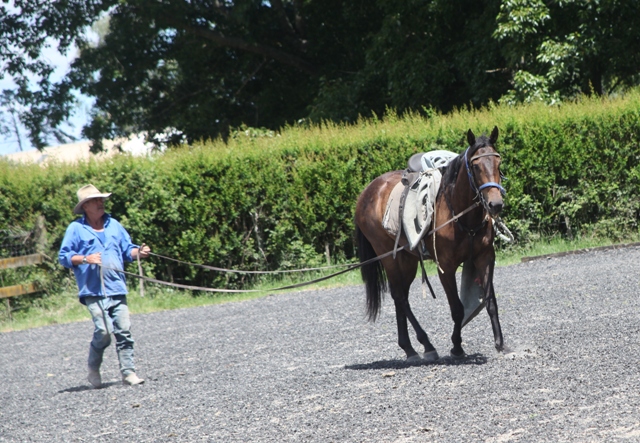 With Neddy being such a worrier, we knew that the educational process would be a long one. The Murtaghs at Esker Lodge had done their usual thorough prep for the sales and he had been well-handled as a baby by Warwick Baty, which is where he was sent. Many visits were made to watch the slow and steady progress as Warwick worked with Neddy; they became best buddies. Then came the day when Neddy was to actually be ridden and, even though there was some trepidation about what might occur, everything went smoothly.
After a rest at home and time to grow, Neddy, the kindly little brown horse, went to further his education at Paul Pertab’s. Paul couldn’t get into his box for three days and, had it not been for Paul’s connection with Vicky and Terry from Club Med, Neddy’s future might have been dubious. Paul’s skill with young horses meant there was eventually an impasse. Neddy trusted Paul and a state of mutual respect had been generated; he graduated to the next stage.
By now Neddy was three and it was time for him to go into training proper; Scott Wenn’s stable was chosen and Neddy blossomed. It was almost as if this is what he had been waiting for. Day by day, he became more confident and, finally, we had a horse that was ready to be a racehorse.
Time for Raceday

Racehorses need names. We mooted many names; noble names, clever names, funny names. Perhaps we shouldn’t have involved wine in our name-choosing meetings. In the end, we recognised that this little brown horse had always been Neddy and that is what he remained [with his Dad’s name tacked on].
Neddy had a smattering of placings on tracks that were either too hard or bogs so there was no fairy-tale win in the early days. Regardless, we loved every moment of following his career to this point and the enjoyment simply couldn’t be measured in dollars. Watching every moment of his trackwork and racing was gold, especially seeing him going dumpty-dum down the road to the track with Scott on board, holding the reins at the buckle and talking on his phone! 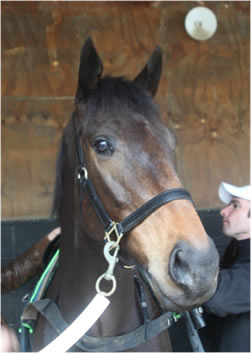 So far, it had been all about patience and time – and a wonderful journey with good horse people who gave Neddy a chance. Along with the scars on his legs, and his honesty and kindness, not to mention the effort he put in himself, he sure left a mark on those who had anything to do with him at this stage of things. If he was a person, you would want him on your team. At this point (July 2017) we were sure that we would see him one day pass the post in first place and we knew that, when that day happened, no one would need George Simon to call the placings — it would be heard, quite probably, as far away as the South Island.

A Neddy special – neck and leg straps still done up and he is standing beside them eating grass! 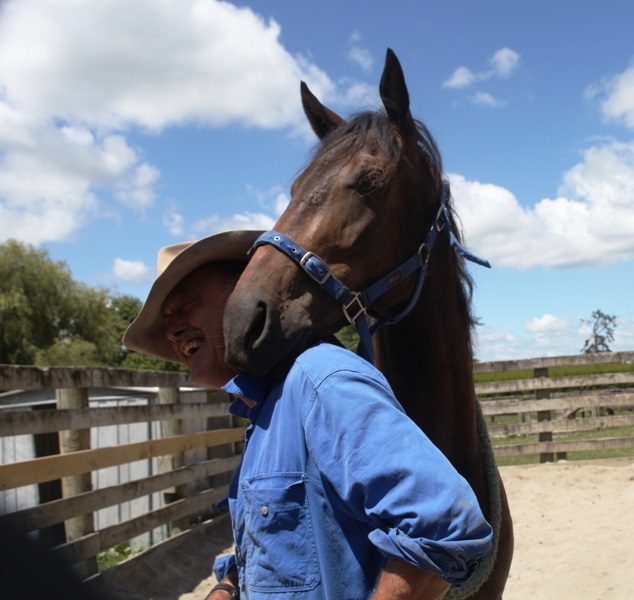 Patience and faith are wonderful things, and the fairy-tale did indeed come true. On 13th October 2018, at his 26th start, the “good fairy” of racing had rounded up all Neddy’s ducks and put them in a row – he won his Maiden race, at 1600m on a Slow8 track at Matamata. Ridden by Sam Collett, he led for much of the way, was tackled and headed, and fought back strongly to win by a short head.

He really tried and, although the second horse pushed him hard, it was his day, and he knew it! Trainer Scott Wenn had produced Neddy looking like a winner, Sam gave him a perfect ride and then, of course, there was “Team Neddy” cheering him on. Celebrations all round that day!

And … there was more to come …

Neddy’s first win was followed by a good second at Tauranga on 3rd November. Then came another superb win at 2200m at Te Aroha on 13th November 2018, that had George Simon saying, “Shut the gate, it’s all Neddy Nadeem”. After beginning awkwardly, Sam Collett had him challenging on the corner and then in front. He surged away to win by 2¾ lengths. He, and we, were on top of the world that day.

And then that big thumb that had been silently lurking came down with a vengeance.

The day after doing impressive trackwork, Scott felt that, although Neddy was sound at the walk, his trot was very “rough”, and he promptly called the vet. The resulting radiograph showed a hairline crack in Neddy’s knee. Had it not been for Scott being such a good horseman and picking up something that was not an actual lameness – just something not right – Neddy would have started on the following Saturday and, very likely, that leg would have broken and our Neddy would have been another track statistic.

As it is, after some time out and recuperation, Neddy should be able to lead a normal life; but no more racing for him. Scott described him in a lovely way; he said that he has a “kind heart” and that there will be someone out there who will just click with him. So Neddy will be re-schooled and we will certainly make sure that he has the best opportunity to live a useful life. 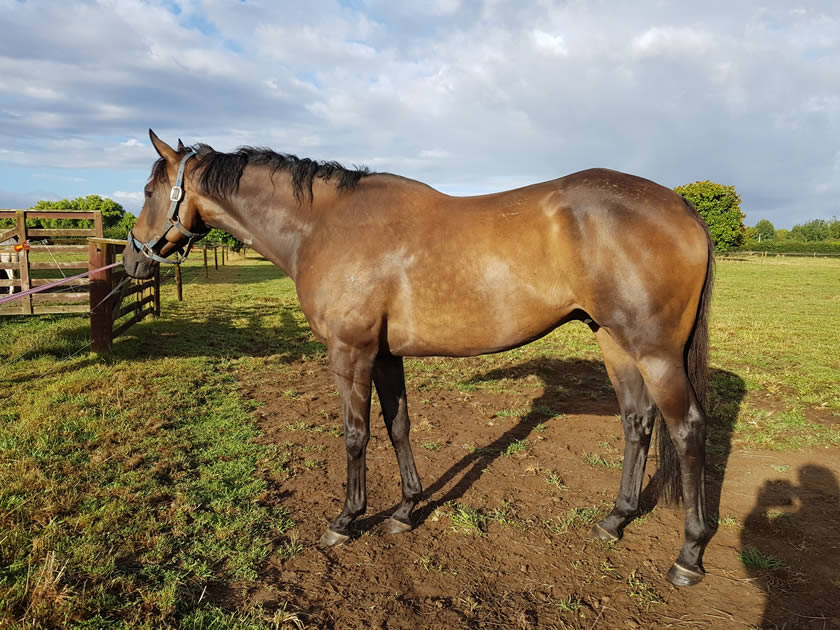 Currently, Neddy has the Penthouse loosebox at Club Med. He is able to see everything that goes on in the yards and on the farm. His hay net is always full, and he is fed four times a day. But he will no doubt be missing his friends at Scott Wenn Racing, and also his special relationship with Scott. It says a lot for the quality of the staff that there were tears when Neddy was loaded onto the truck for his last journey away from the yard.

To those folk who criticise the racing industry – whilst there are ratbags in every industry, there are many more kind, caring and dedicated people within the racing fraternity; people who go all out to give little brown horses like Neddy that extra bit of TLC to make them feel special.

Go well Neddy, you ended your racing days on a winning note and all your supporters wish you all the best for your new career when you are ready to shine on another stage! [This story appears in the March 2019 edition of the NZTROF Bulletin].