When Peter Archer first became involved in racing it was with his parents, their TAB tickets inhand, hoping to see their picks flashing past the post first, a small boy hooked on the thrill of a thoroughbred, dreaming of one day owning a racehorse.

"I was attracted to it at a very early age, I loved racedays with my parents" he says. Peter got involved in small shares in syndicates of horses. "I owned a hoof or part of the tail" he laughs, but those hooves obviously were fast as his early days were successful and he decided he wanted others to enjoy the thrill of racing. This is where it all began, with the highlight in those early days when ‘Gwens Rules’ ran second in the Group One Telegraph.

"It was a huge thrill for the group of owners we got together, they all had little shares, my twin sister and my older sister were both involved and we gave dad a small 1% share, I think that's called tail hairs" laughs Peter remembering the early times.

Getting like-minded people together and going racing was always the initiative. It didn't matter where the trip was, they set lofty goals and enjoyed the ride. "We were taken on an amazing ride with ‘Showcause’, we travelled the country with a great bunch of people, seeing jockey Darryl Bradley atop of co-owner Craig Norgate’s shoulders in winning pictures from the New Zealand Cup is special" smiles Peter. Craig sadly passed away, “so it’s moments like these you really cherish”.

"Names have been important in the horses, its been the fun part. We have a ‘Stryker’ filly, ‘Miss Alexandria’, named after Craigs daughter, in his memory. She had a nice trial recently and is looking promising".

But tributes to people as names aren't all they are cracked up to be as Peter’s wife Karen found out. Other husbands lovingly name boats after their wives as Peter explains that the latest purchase syndicated is a filly by the stallion ‘Authorised’ 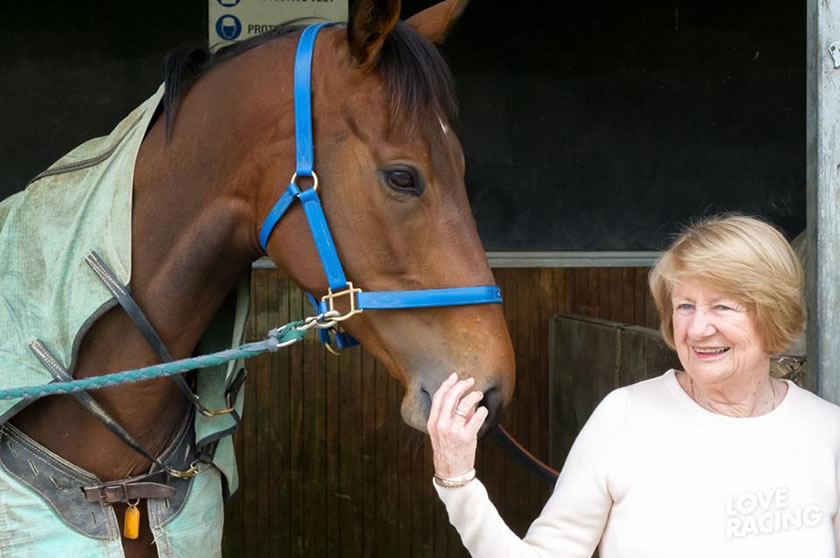 “She’s named after me" quips Karen, "She’s a bit temperamental, a bit of a naughty girl with an opinion, so her stable name is ‘Karen’ – so what does that say?" she laughs. "Her racing name is ‘I'm Allowed To’” muses Karen.

"We are lucky enough to be great friends with our trainer Frank Ritchie and his wife Colleen, boy have we had some fun, travelling, buying horses and racing them" explains Peter. Colleen is not immune to the latest naming convention either. "We named another filly ‘She is Stryking’, she has a stable name of Colleen" interupts trainer Frank Ritchie, "we have to keep the girls happy" a cheeky grin appearing as the pair hatch plans for their latest purchases.

"We plan a trip to Australia every year, we go to the sales there and buy fillies to syndicate, the fillies are cheaper; we can get a well bred filly to race and then have as a breeding prospect" explains Peter, "there are also so many fillies’ and mares’ races in New Zealand, its an accessible market for us, but at the end of the day its a sport, a hobby, like golf or fishing".

Peter’s involvement in racing is not limited to ownership however. He is currently the Deputy Chairman at the Waikato Racing Club, bringing his experience with his own management consultant company to help make some of the hard decisions required recently. "It’s not for the faint hearted, we have made some tough decisions, but it’s for the greater good of racing, the board all have different professions, ideas, but we all have that racing passion" explains Peter, having spent six years in the administration role.

Karen however has taken a more hands on role for her part in the racing venture. Trainer Frank Ritchie laughs when asked about Karen’s role. "I had Karen mucking out, she was ‘second in command pooh picker’, that's until we realised she makes a pretty good staff breakfast, so we just swapped the size of the fork she uses."

Peter and Karen reside close to the Ritchie stables on six acres that are used to spell their horses when required. "Its nice looking out over the fields seeing the horses, they get spoilt when they are home" smiles Karen.

This summer Peter and Karen, Frank and Colleen will be watching their horses and namesakes racing, and we at Love Racing say, Go Karen, Go Colleen, and good luck team.